Before independence, Savarkar was called ‘recruitveer’ by Congress; Was told that the bag of the British 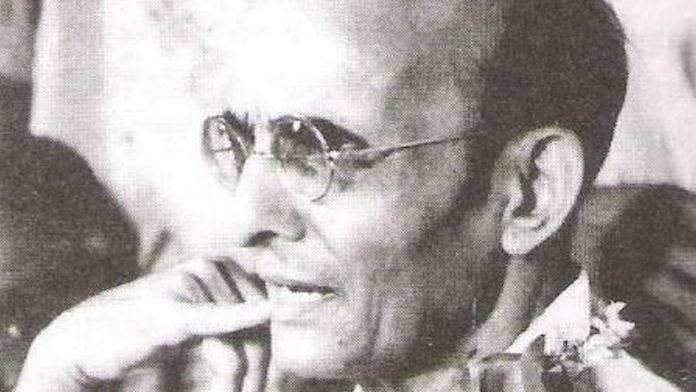 Savarkar’s best security approach is reflected in the fact that on the one hand he requested Bose to get the support of the Axis countries to overthrow the British, on the other hand he called upon the Hindus to militarize themselves, so that they could fight the Second World War. Taking advantage of the circumstances, the British could be recruited in the Indian Army. The British, who had been trying to keep Indians disarmed and unprepared due to fear and mistrust long ago, were now encouraging them to join the army to fulfill their military needs.

Work done towards ending caste discrimination in the army

One of the greatest services to the nation done by Savarkar, Munje and the Hindu Mahasabha was that they persuaded Indian youth to end the caste distinction between warrior and non-warrior Hindus when they joined the British Indian Army in 1930. . Munje, who was a supporter of militarization of all Hindus, had started working towards ending caste discrimination in army recruits even before Savarkar entered the political scene. However, after Savarkar emerged on the political horizon, this campaign received widespread encouragement from the British. The British only needed soldiers who fought for them in World War II, so they embraced Savarkar’s proposal without considering its long-term consequences. The credit for this goes to Savarkar’s secret plan, under which he was preparing a parallel battlefield for the Indians, for which he was to be thanked. This was similar to the ideals of Chhatrapati Shivaji Maharaj, who was breaking caste ties in Maharashtra by recruiting all Hindus into his army and making them fighters. The untouchable Mahar caste was also included in these soldiers.

Savarkar’s call for militarization of Hindus was supported by sound reasons and rational thinking. He had seen how the Muslims were far ahead of the Hindus in the army in terms of their numbers and the Hindu-Muslim population ratio in the country. He was considering the partition of the country on the horizon in view of the Congress’s cowardly reaction to global Islamism and believed that the final conflict between India and Pakistan would be decided by military power.

The concern of the Muslim League had increased

The Hindu Mahasabha’s militarization campaign led to millions of Hindus joining the British Indian Army, and over a period of five years (1939–43), the number of Hindu soldiers increased from one-fourth to nearly 70 percent. Alarmed by the increasing number of Hindus in the army, the Muslim League expressed its concern four times between 1941 and 1944. Two warnings in this regard were given, one by Sir Ziauddin Ahmed, the then Vice-Chancellor of Aligarh Muslim University and the other by the first Prime Minister of Pakistan, Liaquat Ali Khan, who was then secretary of the All India Muslim League.

Subsequent events proved that Savarkar was right in his place. More than 90 percent of the total Muslim soldiers of the British Indian Army chose to join the Pakistani Army at the time of Partition. In 1947, immediately after the partition, Pakistan invaded India and occupied one-third of Jammu and Kashmir. Among these invaders were those Muslim soldiers who were once involved in the Azad Hind Fauj. If the military balance was against India as compared to Pakistan at the time of partition, the new Muslim nation would have tried to swallow Muslim-majority states along the Indian border—Rajasthan, Gujarat, and though Muslim-majority areas of Bengal, where Muslims outnumber Hindus. .

During his militarization campaign, Savarkar traveled all over the country, emphasizing his view that World War II brought a golden opportunity for Hindu youth to receive arms training, which they could use for the benefit of the nation when the time came. Savarkar told him that once you people will learn how to fire a gun, then it will be in your hands to decide which way you would like to turn the barrel of your guns for your benefit. The British wanted to keep politics away from the army, but Savarkar emphasized that Indians must take politics into the army for the final battle of the nation. Hindu Mahasabha activists joined hands with army recruiting officers and started several rifle clubs. Savarkar appealed to the youths of the Konkan, especially the Bhandari and Kharvi classes, who were traditionally born sailors, to get training in the Navy and occupy important positions there. He said that even though today these soldiers are appearing like mere slaves in the army on the salary of foreign government, but there is no doubt that when the momentous occasion comes, these people will prove themselves to be true patriots and staunch Hindus.

In the past, youths had to rot in jails for possessing pistols, but today the British themselves are handing you rifles, guns, artillery and machine guns. You guys get fully trained as soldiers and generals. Get thousands of Egyptians trained as skilled specialists by recruiting them into shipyards, aircraft, gun and ordnance factories.

I request you guys to join the army and get trained in gun handling, so that you can turn your face to freedom when the time comes. Whatever I am telling you clearly, I have said the same thing to the Viceroy himself. You guys should never worry about agreements and bonds. The back part of those documents is completely blank. When the time comes, you can write new agreements and bonds in it. You guys should understand very well the fact that even if you cover the whole earth with such proposals and contracts, you will never get Swaraj. But if you write these proposals with rifles strapped to your shoulders, you will surely achieve them.

Also read: Marx’s grandson had defended Savarkar, how rational was his opposition by the Marxists of India

Savarkar’s militarization policy earned him a lot of praise from Bose. In his message broadcast on Singapore Radio on June 25, 1944, Bose said-

When almost all the Congress leaders in their misguided political mood and lack of foresight are condemning all the soldiers of the Indian Army as mercenary ponies, it is heartwarming to know that Veer Savarkar fearlessly armed the youth of India. Inspire you to enroll yourself in the armies. These registered youths themselves will provide us trained soldiers, from whom we will select soldiers for our Indian National Army (Indian National Army).

Ras Bihari Bose also expressed his gratitude to Savarkar in his radio talk – ‘I feel the pleasure of discharging my duties towards one of my senior most companions while saluting you. Through saluting you, I am saluting the symbol of sacrifice myself. Paying his respects to Savarkar’s unparalleled sacrifice, unspeakable sufferings and invincible courage, he further said – ‘I can clearly see the divine hands of God behind your unconditional release. You have once again proved your greatness through the propagation of your idea that our politics should not necessarily depend on foreign politics of others. The enemies of England will certainly be our friends. Ras Bihari concluded his radio talk with a shout of ‘Vande Mataram’.

Congress called Savarkar a stooge to the British

Frightened by the massive public support for Savarkar’s national security building campaign, the Congress turned to playing the dirty game. He even mocked Savarkar by calling him a ‘recruit veer’ while promoting him as a stooge of the British. The Congress’s campaign of censure was aimed at attacking the growing popularity of the Hindu Mahasabha, which it was gaining due to its clinical anti-Pakistan campaign. Savarkar, however, remained unmoved. Like Rana Pratap, the nation was paramount for Savarkar too.

The Royal Indian Naval Mutiny in 1946, though a brief event (February 18-23), has still not got its due place in Indian history. That rebellion was the final blow, which sounded the death knell for the British Empire in India. The rebellion, which began from the starting point of Bombay, was supported throughout British India, from Karachi to Calcutta, and eventually was joined by over 20,000 sailors in 78 ships, a large number of those who were involved in Savarkar’s militarization campaign. Joined the Navy under

On 19 February, just a day after the rebellion began, Secretary of State Fredrick Pethick-Lawrence announced in the House of Lords that a three-member cabinet delegation would be sent to India to resolve the Congress-Muslim League standoff in India. As a matter of fact, the Labor Party took a completely different approach to the problem of India from its predecessor, the Conservative Party. Two weeks after the rebellion, the British Prime Minister met with the Emperor and on March 5, 1946, it was decided to make India independent.

Before independence, Savarkar was called 'recruitveer' by Congress; Was told that the bag of the British