Demonstration in black clothes will change the days of Congress 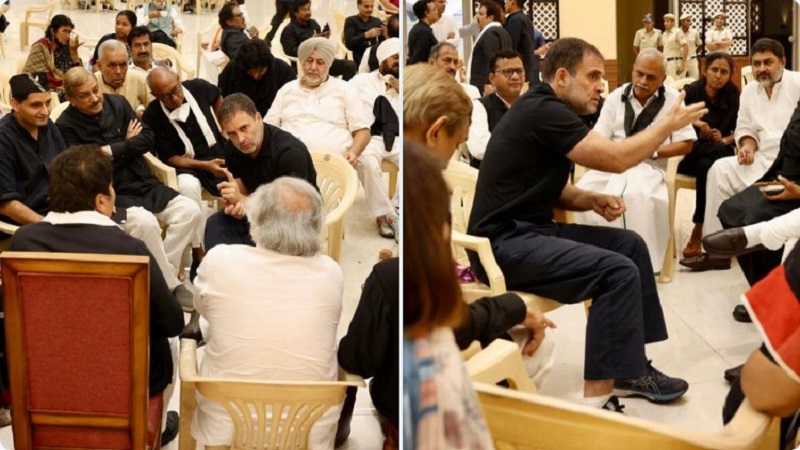 a family. So strong that no one can imagine standing before him in independent India. Whoever challenges it, its existence will disappear. Or else he will have to spend the rest of his life as a hanger. Today he has to appear before the ED. It is not possible to say when the arrest will be made on the charges of misappropriation.

A Party. So powerful that from north to south, from east to west, no one’s existence can be seen in front of him. Today she herself is facing the crisis of existence.

Those who have been changing the Chief Minister voluntarily, driving the Prime Minister from behind the scenes, are used to crushing every constitutional institution, today it is natural to suffer if the common man of this country considers his heir to be ‘Pappu’.

This is the reason why the ruckus created by the top Congress family on Friday (August 5, 2022) along with their supporters from Parliament to the street in black clothes went in vain. It was more or less a political gimmick for the media as well, which stemmed from the tightening grip of the Enforcement Directorate in the National Herald money laundering case.

Due to this fury of Congress, some childhood stories started floating in the memories. These are the stories which show that the Congress was bound to fall, the arrogance of its top family was to be shattered. One day he had to be naked in front of this country and its people.

There lived an owl in the forest. He doesn’t see anything during the day. He hid in the nest all day long. One day a monkey from somewhere in the scorching heat came near that nest and said that today the sun was shining like a ball of fire. Hearing this, the owl said – you are lying. The sun was nothing. If the moon had said, I would have accepted it too. The monkey tried hard to explain. But the owl is not ready to listen. On the contrary, he started making fun of the monkey with his companions. Desperate to kill the monkey. In the end, the monkey escaped and saved his life.

Just like in the same story, the top Congress family imprisoned themselves in the cell of Janpath. The voice of the people was ignored. Ignoring Hindu sentiments under the guise of Muslim appeasement. On the strength of majority, he kept telling the truth to be false. Keep believing that what he said is the ultimate truth. So when the new generation of India embraced, social media gave voice to their assertiveness, Congress did not even know when the ground slipped from under its feet.

Story 2: The Frog (Congress) and the Ox (Janata)

A frog lived with his family in the pond. Telling false stories to his own children to make himself look bigger and stronger. One day the frogs came out of the pond. saw a bull. They were astonished to see his stature and strength. Returning to the pond, told the father about the bull. The frustrated frog went on inflating its body to impress the children and eventually exploded and dispersed.

The Congress, which was cut from the ground, considered the pond as the whole country. Assume that no one is bigger or stronger than the Nehru-Gandhi family. Therefore, when the people showed their strength, it was their destiny to burst.

It was dry. From humans to animals and birds, they crave for food and drink. When the crow, who had been looking for food for many days, saw the heron eating fish selectively in a pond, he found it very easy. When he reached the bank of the pond, the heron offered to help. Warned that going into the pond could be fatal for him. But the crow in his pride. He himself got down in the pond to hunt fish. tangled in the mud. After some time he died of suffocation.

This story tells us that nothing is achieved by sitting. It requires constant labor. The desired result cannot be achieved by mere copying. In 2014, when the BJP emerged due to continuous grassroots labor, Narendra Modi came to the table of Indian politics riding on the chariot of Hindu sentiments, even after that the Congress did not come out of the mulling. She thought that she would regain power by fooling the Hindus. Therefore, whenever elections come, his crown prince becomes a ‘Hindu’. After the elections are over, they leave abroad. Politics is a full time job. Here copying also gives results only if you are constantly active on the ground.

There are many stories of childhood that we tend to forget as we get older. But they contain lessons of a lifetime. Perhaps there is a way out of these stories to give some life to the party lying on the deathbed. But the big question is that the party which did not allow the country to read the correct history for its political gains, would the leaders of that party ever read these moral stories?

Demonstration in black clothes will change the days of Congress