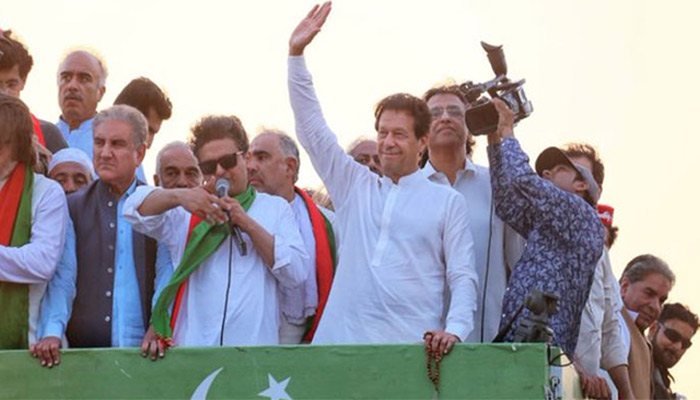 PTI chairman Imran Khan has given a six-day ultimatum to the government saying that if the date of next elections is not announced then I will return to Islamabad.

Addressing PTI workers in Islamabad, Imran Khan said that these people were leading the country towards anarchy. The people will hate the police for what they have done.

Imran Khan said that earlier I had said that I will sit here till the date of election is given but the situation created in the last 24 hours has created fear that there will be chaos in the country. ۔

He said that the IG of Islamabad was to be punished and he was posted here. They are corrupt in the same way they have selectively brought in corrupt officers. In which country does it happen that tear gas is thrown at peaceful protesters?

He said that what could be a greater insult to the nation that was to be punished, he was promoted to the highest office, his son was made the Chief Minister. More than half of the cabinet is on bail, the current prime minister was to be punished. The nation will not allow criminals to rule this country.

He said that all sorts of tactics were used to thwart the independence movement. Everyone saw the way he fought tear gas and shelling. These people used to call us Mummy Daddy Party. I saw all kinds of young, weak and educated people.

“We are intimidated that no one can come to power unless the United States wants to,” he said. We have been intimidated for years. I saw for the first time that the nation was free from fear. The government threatened police with violence, false cases and death.

Put aside the matter of Huzoor’s pride, if I praise Modi...