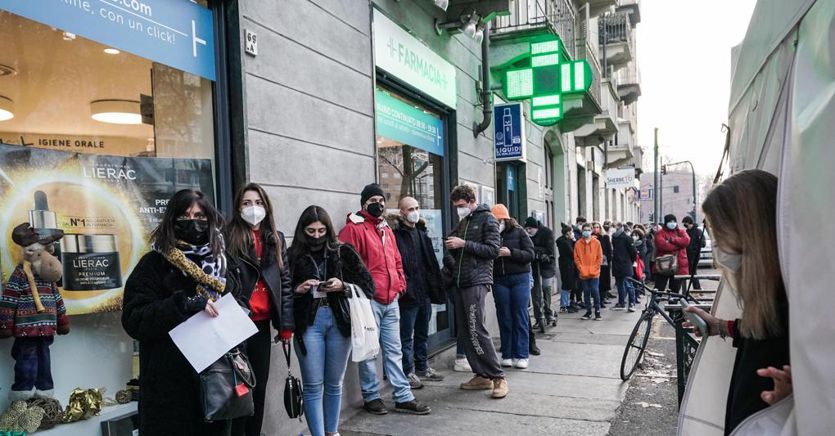 The extension to parapharmacies of the possibility of swabs divides two shareholders of the Draghi Government: on the one hand the Five Stars, who are in favor (the solution would allow to ease the tension that has been created in Italian pharmacies, given the long waiting lines ), on the other Italia Viva.

The first half of the game was played in fact on Wednesday 12 January, when the majority was beaten in the Senate Constitutional Affairs Committee on an amendment to the Covid decree, proposed by the M5s, which asked precisely to allow parapharmacies to carry out rapid molecular and antigenic tests. anti covid. Against the modification, which had 13 votes against and 11 in favor, the whole center-right took sides, plus Italia Viva (the latter political force with the Five Stars supports the Draghi executive). The amendment had received the positive opinion of the government and the supervisor of the provision, Nazario Pagano of Forza Italia. “Obviously it does not end here – underlined the pentastellated senators -, we will re-propose this proposal as soon as possible”. Eventually the amendment was transformed into an agenda (which commits the government to find “the most appropriate solutions” to queues in front of pharmacies for tampons and offer alternatives, especially to citizens of smaller municipalities), which had the favorable opinion of the Government and was approved by the Senate.

In a close turn, however, M5s has raised, “changing horse”. In light of the rejection of the proposal presented to the Constitutional Affairs Commission in the Senate, the pentastellate deputy Stefani Mammì announced that the Five Stars will present to the Social Affairs Commission in the Chamber an amendment to the Milleproroghe decree which asks to allow parapharmacies to be able to carry out rapid unsanitary tests , in order to expand the detection activities of SARS-CoV-2 infections. The deadline for submitting proposals to amend the provision will expire on Thursday 20 January.

Parapharmacies: a circular would suffice on tampons

The president of the National Federation of Italian Parapharmacies Davide Gullotta pointed out that the parapharmacies have long been ready to take the field for the execution of rapid antigenic swabs, currently only available in pharmacies. Gullotta called the rejection of the amendment to the Covid Decree “shameful”, while at the same time asking for an urgent intervention by the Minister of Health Roberto Speranza. “In this emergency phase, one of his circular would be enough to break the deadlock”, he recalled. And the Federation’s judgment is harsh, according to which “there is a strong suspicion that lobbying in favor of the pharmacy system and to the detriment of citizens” weighed on the vote. There are 5 thousand parapharmacies throughout Italy and 10 thousand pharmacists work there. Inside each parapharmacy there is always at least one pharmacist and these are businesses controlled by the ASL. Currently, parapharmacies dispense veterinary drugs, medical devices and drugs for human use without a prescription.

Federfarma: «Parapharmacy buffers? No interference with us “

For their part, the pharmacies deny that they interfered with the rejection of the pentastellato amendment. “We have no interference with the decisions taken in parliament and by the government – said Roberto Tobia, national secretary of Federfarma -. Therefore, if it was considered that at this moment the parapharmacies cannot be enabled to carry out Covid swabs, there will have been technical reasons that have led Parliament to decide in this regard. So we have nothing to say about the case ».

Netflix down by 20%, the lockdown effect is ending for the...

The United States drops charges against famous Chinese professors, and the...

Exceptional transport in Naples: on a scooter with a glass door...

Capello: “Ibra? I asked Juve to take him immediately. I just...

Usa, Will Smith dances and sings with his mother to celebrate...

we’re going to live together – Time

The incredible story of this 19-year-old who flew around the world...

What to wear this Chinese New Year: Orange, black and stripes...

The best and worst stadiums in Europe according to the fans:...