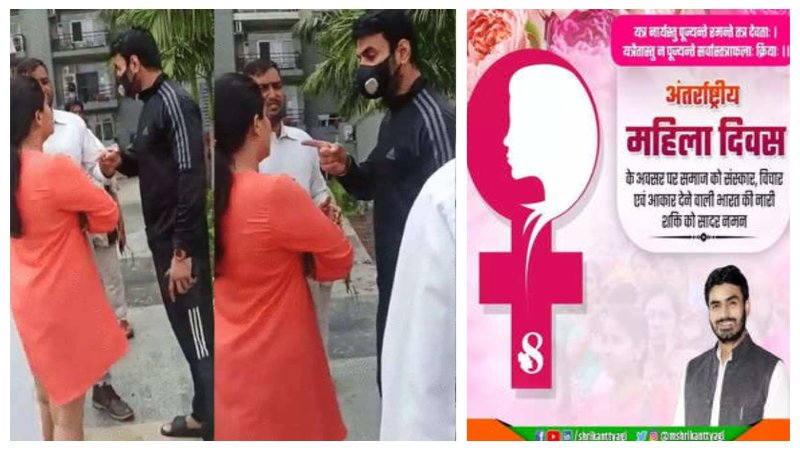 Uttar Pradesh Police has intensified action against Shrikant Tyagi, who abused a woman in a society in Noida, Uttar Pradesh. Police have detained five people including Tyagi’s wife. Along with this, three of his luxury vehicles have been confiscated. At the same time, the police have formed several teams to nab Srikanth.

At the same time, National Commission for Women (NCW) chairperson Rekha Sharma in a letter to the Director General of Police (DGP) of Uttar Pradesh has demanded the arrest of Tyagi. He has said in the letter to direct the police to ensure speedy and fair investigation of the matter.

@NCWIndia has taken cognizance of the incident. Chairperson @sharmarekha has written to @dgpup to ensure fair and speedy investigation in the matter. NCW has also sought FIR and arrest of the accused for assaulting a woman.
https://t.co/yoYVZlbTxl

On the other hand, after the video went viral, the police have registered a case against Tyagi under various sections. Noida Central’s ADCP Ankita Sharma said that if necessary during the investigation, more sections will be added against the accused.

Noida Police raided Tyagi’s flat to arrest him, but he is said to be absconding along with his family. At the same time, the police are raiding many places in the search. During the raid, the police have seized three luxury vehicles of Shrikant Tyagi. He had got MLA written on one of his vehicles.

According to the media report, this is the same Shrikant Tyagi, whose wife had caught him in a Lucknow flat in February 2020 while celebrating the rallies with a woman. She had reached there with her children and created a ruckus. The wife had also filed a case against Tyagi at the Gomti Nagar police station.

It is being told that Shrikant Tyagi was first police protection It was also found, but it was removed two years ago. Apart from police protection, he also kept an escort with him in a fake manner.

Here, BJP Kisan Morcha National President and Fatehpur Sikri MP Rajkumar Chahar has issued a video message saying that Tyagi has never been a member of the Kisan Morcha’s national council nor is he now.

Actually, on Friday (5 July 2022), a video of Omex Society located in Sector 93 of Noida went viral. In this video, Tyagi is seen planting a tree at a place. When the woman raises questions on this, he abuses the woman and then pushes her. During this, someone made a video and made it viral.

It is being told that Tyagi has joined the society. illegal occupation of the park has done. A notice was given to him regarding this, but Tyagi refused to leave it. The woman was trying to talk to Tyagi about the same subject while Tyagi was planting a tree.