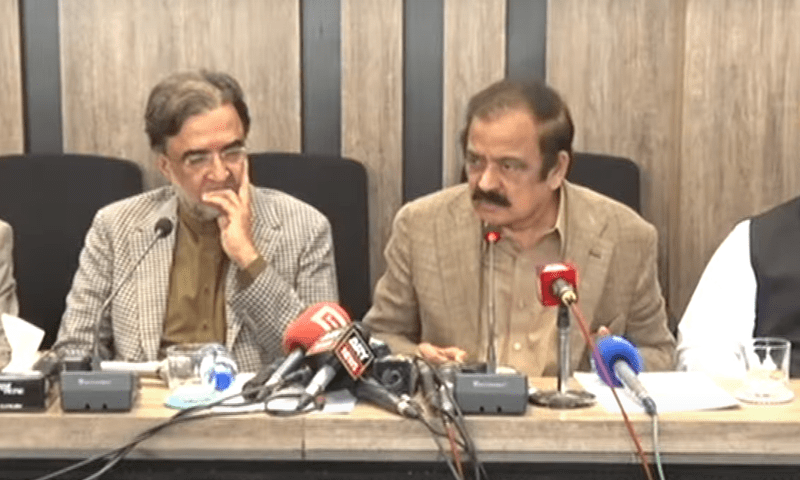 The federal cabinet on Tuesday decided not to give permission to the Pakistan Tehreek-e-Insaf to organize a long march in Islamabad, citing the 2014 sit-in of the former ruling as the reason.

The decision comes amid a government crackdown against PTI leaders in major cities across the country. The interior ministry has directed the police to deal strictly with the PTI demonstrators with houses of PTI leaders and workers raided late Monday night.

Moreover, the federal capital has also imposed Section 144 of the Criminal Procedure Code (CrPC) of 1973 (authorizes the executive magistrate of any state or territory to issue an order to prohibit the assembly of four or more people in an area) in Islamabad for two months.

The cabinet members said it was a “unanimous decision” to stop the PTI from staging the protest and criticized Imran Khan for using “foul language and causing anarchy” in the country.

Sanaullah further supported the cabinet’s decision by the PTI’s inability to submit an affidavit in the Islamabad High Court, ensuring that the long march would be peaceful. He accused the PTI of going into hiding in Peshawar and doing activities on the Khyber Pakhtunkhwa government expense.

“Imran Khan wants to divide the nation and the PTI’s intentions are clear to create division and chaos in the country,” the interior minister said.

PPP leader Qamar Zaman Kaira, who is serving as an adviser to the PM on Kashmir Affairs and Gilgit Baltistan, criticized President Arif Alvi for being the “opposition leader” in the incumbent government tenure.

“The behavior of President Alvi is constitutional. We have no word else than condemn Alvi’s actions, ”he said and blamed the president for the prevailing political crisis in the country and Punjab. He also accused Alvi of damaging the economy by linking the political situation to it.

“If we see, this is a continuation of PTI’s 2014 policies which is based on lies,” Kaira said.

Other cabinet members also spoke in the same tone, hurling accusations that the PTI did not perform well in its tenure and wanted to create the same “anarchy situation” that it did during 2014 sit-in.